Clutching our breakfast boxes supplied by our hotel, The Lakeside Retreat, we sat and waited in the airport. An Indian lady came in with her husband, and while he sorted out their baggage she sat down next to me and tried to strike up a conversation. Alas, I understood not a word of her Hindi. She kept pointing out the window at the mountains turning from pink to crystal white in the rising sun. I thought she was trying to impress upon me how beautiful they were. But then she counted the fingers on one hand, held her hand in the shape of a plane, then turned the hand upside down. She smiled a lot at the same time. I really have no idea what she was trying to say.

Low clouds hung below the green hills that ringed the valley but except for a few wisps higher up it was clear. We had just bought scalding hot milk tea when we were called to board, so we had to leave the tea behind and line up at the gate.

Michel Peissel flew to Pokhara from Kathmandu as there was no road between the two in 1965. He took his two assistants Calay and Tashi and 650 pounds of equipment with him, including over a hundred packs of cigarettes. But in 1965 there was also no airport in Jomsom so he had to trek there from Pokhara, a fraught journey during which his porters went on strike for more money then left him halfway. He managed to complete the journey with the help of several yak owners and their recalcitrant yaks. It took over a week to reach Jomsom.

The flight to Jomsom is just 18 minutes, so no sooner were we up and flying along the Kali Gandaki river gorge that divides the Dauligiri and Annapurna ranges than we began to make our descent. 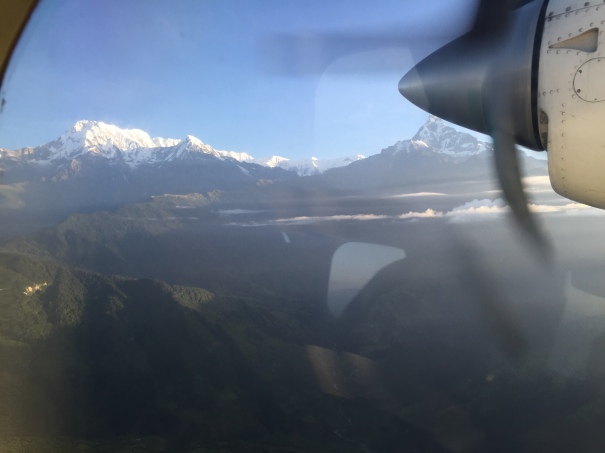 After the warm humidity of Pokhara, the cool dry air of Jomsom was a relief; we were now 2000 metres higher. Jit took us to the Mustang Monalisha (sic) hotel where we sat in the sunny upstairs dining room and ate the contents of our breakfast boxes–two boiled eggs, a cheese sandwich, a banana, an apple and a small bottle of sickly sweet Frooti juice–washed down with sweet milk tea. We were waiting for our horses to arrive so I walked out into the street to take a look at Jomsom. 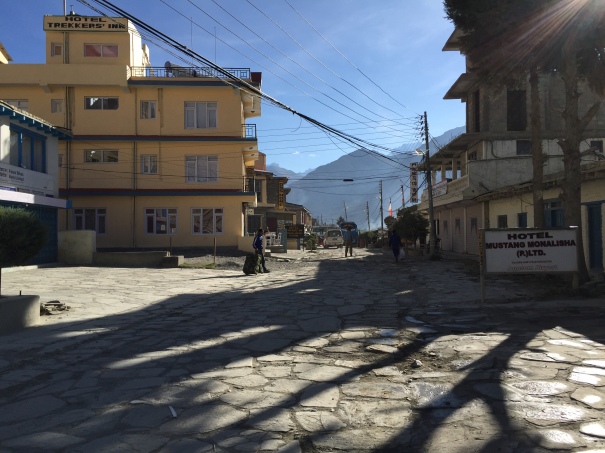 It was still only about 7am. Smoke rose from chimneys and, except for a rickety bus wheezing up the street, there was little sign of life. Opposite the airport, Nigiri mountain rose high above the town. Jomsom was dry, dusty and brown and it possessed a serenity long absent from the chaotic Kathmandu and the bustling streets of Pokhara.

After an hour and a half a young boy appeared leading a brown and a white horse. We had been joined at the airport in Pokhara by Netra, our assistant guide, and so with him, our horse-boy Dabendra, our two horses–one for me to ride, one to carry our packs–and Jit, we set off on the first day of our expedition into Upper Mustang, just as Michel Peissel had done fifty years before:

Our path now led us deep into the great gorge of the Kali Gandaki river. As we progressed, gone were the green slopes rising to snow peaks. We entered a parched, desert-like void, made up of huge yellow mounds and great towers of rock, rectangular in shape, soaring masses of eroded cliff, barren and dry. The sky along the horizon to the north was blue and crystal clear. We had left behind the world of vegetation, moisture and greenery, to step on to the edge of the great, barren Central Asian plains.

And so had we.