As we set out for Tsarang, first we followed the rough road high above the river. Opposite were the fluted cliffs honeycombed with caves and at the top, completely flat, dark grey plains. It was impossibly dry and barren. Even the stunted bushes grew sparse on the yellow hilly desert spread before and behind us. Then Neville, Jit, and Netra took a narrow track, leaving me at the mercy of Dabendra with whom I descended to the river bed and criss-crossed the river back towards Dhe.

Since the brown horse carried our packs, Dabendra wasn’t riding and couldn’t gee my horse up, but at some point we became separated and I found myself alone on a horse determined to get to Dhe. I had no idea whether Jit intended for us to head through Dhe, but I just had to let the horse go and it climbed up the river bank and into the village, ambling along the paths between houses and by the stone-walled fields and groves of trees, passing a wall of prayer wheels on the left as though it knew the protocol. The place was deserted but for an old woman and a little girl washing clothes at a tap. The old woman replied to my “Namaste” with little enthusiasm and the little girl stared up at me with a serious face.

I realised the horse knew exactly where it was going when it suddenly stopped at the doorway of a walled yard, turned and entered. As my head hit the top of the doorway I finally had cause to be thankful for the wretched helmet. I don’t know whether the horse had smelled it or made a note of it on our previous visit, but it must have felt very pleased with itself because the yard was filled with cut grass spread out and drying in the sun. But before it could set about eating the village’s precious store of winter feed, I dismounted and managed to turn the creature and pull it out of the yard. I was terrified someone was going to see me and think I was stealing their hay. Dabendra eventually turned up and we sat and waited in silence for the others. They soon arrived. As it happened we did need to stop in Dhe so we could be registered at the check-post. This was the first time I became aware this was necessary. All foreign trekkers had to be registered at checkpoints throughout Upper Mustang.

Jit decided they would once again take the narrow track along the cliff while we would travel along the river bed, so we doubled back while they went on and travelled along, criss-crossing the rivulets once again, with Dabendra whooping and calling to hear his voice echo off the cliffs.

It was easy to see how the area had once been an ocean. In places the water ran clear blue over white sand. I wished we could have stopped and waded in the water, even though it was freezing. In that bright sunshine it would have felt like being by an ocean inlet and I wanted to see what was in the wide deep pools. It was peaceful travelling along that wide river bed with huge cliffs towering either side, but as the morning wore on our old friend the wind came up. But before it became too ferocious, we rejoined the others and rounded a point before heading up the Tsarang Khola. We crossed a wooden bridge and began ascending a track that climbed along the side of the cliff. As the track went on it became stonier—large slippery stones that clinked under the horses’ hooves—but then we turned and began to climb a very steep slope, straight up the cliff, covered with the same large stones. It was very hard going. The horses eyes bulged and they breathed heavily and frequently slipped and threatened to lose their footing. I think they were scared; I certainly felt more afraid for them than for myself. When we finally reached the top I dismounted and hobbled to a ledge to sit down and rub my aching knees.

Netra, who still hardly seemed out of breath after the steep climb, came over and sympathetically rubbed my knee as well. 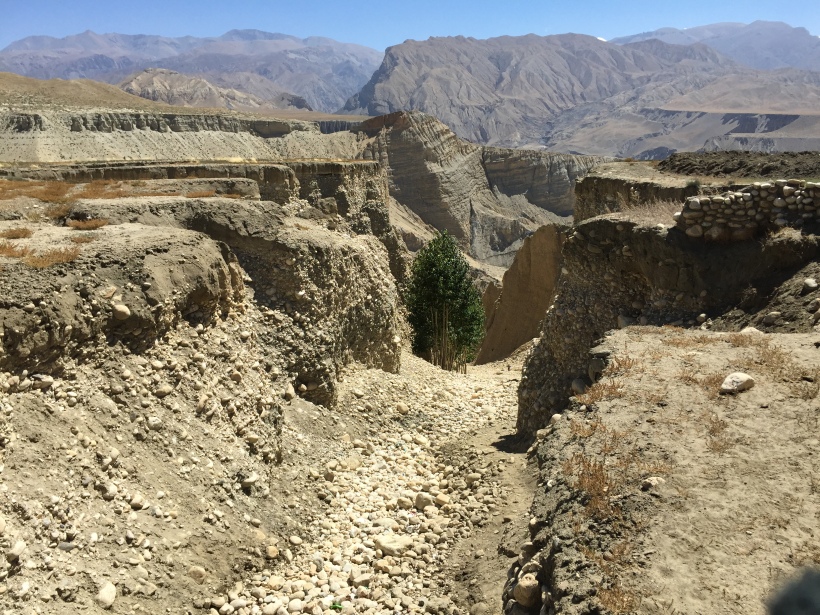 When Jit and Neville arrived, we waited while everyone recovered before continuing on into Tsarang. We travelled along a pathway between stone walls enclosing groves of poplar trees. Some horses were penned in one walled yard and in a field also surrounded by a low stone wall a man was working with two strange looking beasts, like black and white cows but with large yak horns.

Dzos are a cross between cows and yaks. The females, actually called Dzomos, are fertile while the males, Dzos, are sterile. Yaks are rare in Upper Mustang now.

Jit led us through Tsarang and almost out the other side before stopping for the night at the Kailash Guest House.