A photo of Tsarang is on the front cover of my copy of Michel Peissel’s book. When I showed it to Jit he said, “I think you will see more trees now.” He was right. The village in Peissel’s picture shows numerous, bright green, walled fields but few trees, but now trees grow all through and around the village. Two buildings dominate Tsarang: the monastery and the huge, five-storey, palace.

Michel Peissel spent a lot of time in Tsarang where he stayed in the monastery at the invitation of the abbott. The abbott was the son of the Raja of Lo; he left his monastery to marry and had a son. His wife died when the boy was only four-years-old and the monk decided to return to his monastic way of life, confining himself within the royal apartments of the Tsarang monastery.

…he took a vow to devote himself for three years to solitary meditation, and to study the Tantric paths of enlightenment in atonement for his past behaviour. He also vowed that he would not eat during daylight…

The son was living there with him and about a dozen elderly monks when Peissel came to stay. That boy is now the Crown Prince of Lo, or Gyalchung, as the current Raja* has no surviving children, and while he is often described as being the Raja’s son he is in fact his nephew.

We climbed the rough stone stairs of the old palace and a monk unlocked a wooden door. It had been one hundred years or more since the Raja of Lo used this palace as a residence and it is all but a ruin. Still, the chapel has lamps lit and the seven bowls of water set before its golden gods each morning. I marvelled that it hadn’t fallen down in the earthquake and prayed there would be no tremors as we clambered up a rickety ladder and onto an internal balcony which railings were long gone (if they ever existed). The whole place was dirt, dust, and crumbling stone walls and timbers. One room appeared to have been the “bathroom”, two timber-framed holes in the floor falling the three storeys to the ground below—the traditional style toilet still used by Loba, the waste mixed with hay to become compost. I followed Jit into an adjoining room but he quickly turned and ushered me out saying,

It stunk, and not of animal dung.

The monk then unlocked a door to another small chapel filled with ancient, mediaeval-looking weapons all hanging on the wall or sitting on dusty shelves as though they’d sat there since being put away after the last battle. In 1964 Michel Peissel visited the same room and, from the way he described it, nothing about it had changed. To my amazement even the most gruesome object was still there:

Fumbling around the altar among the swords, our guide eventually gave me a dark brown object that to my disgust I recognised—by the light of the small window—as a dried up human hand!

Hanging on a hook alongside some of the other implements was indeed a black, shrivelled human hand, its dirty, yellowed nails curved, hard and smooth. Peissel was told, or assumed, that it was the hand of a thief which had been cut off as punishment, but when Jit asked the monk he had a different story.

“One who is building this, err, working,” Jit attempted to translate, “then, err, same king is thinking—this very bad thinking—same palace not other place, err, build. For that they cut so after he is not going to work other.”
“Oh, they cut off the builder’s hand so he couldn’t go away and build another palace for someone else?”
“Ee, yes!”
“It must be very old,” I said.
“Yes. Not less than, err, more than two centuries old.”

Neville had found a box covered in skulls and asked Jit what was in it. Jit asked the monk.

Hanging on the wall above was a suit of chainmail and I lifted part of it. It was very heavy.

Next to it was a helmet and then what looked like a breast plate made of some kind of thin bone.

“Yes I think so one, ee, animal,” Jit tried to explain. “What calling, err, maybe this area I don’t think so. This found, err, lower place.”
“Is it shell?” I asked
“This, you know, err, is skin. Is out of skin this kind of, err, things.”
“Like a crocodile?”
“Err, not crocodile. Other is, this kind is very similar. Is walking like the crocodile in the forest. In some place they find now also. From our village also they found also, mm, like a lizard.”
“Like a big lizard?”
“Like the, err, I don’t know so English name.”

I really had no idea. Nepal has a creature called a gharial that lives in the jungle rivers. It is just like a crocodile, but has a long, very narrow snout with a bulbous growth on the end. Maybe it was a gharial skin.

The monk told us it was too dangerous to visit the rest of the palace and anyway, Jit explained, there was not much else to see, just a whole lot more empty, dusty, rooms, but we were allowed to climb up to the next floor from which we’d get a good view of the village as long as we didn’t stay up there too long. We were now on the fourth floor and through frameless window holes we could see all of Tsarang spread out below us, its neat white-washed houses, their roofs lined with stacked timber, surrounded everywhere by green trees. We even looked down now on the monastery over on its high ridge. On the far side of the village was the large entrance chorten from the cover of Peissel’s book and, beyond this, brown plains where the wind was whipping up the dust towards the dull hills beyond. Jit told us we would be heading that way the next day. He then pointed out a hole in the floor where the earth was crumbling away, and so we quickly climbed down and out. 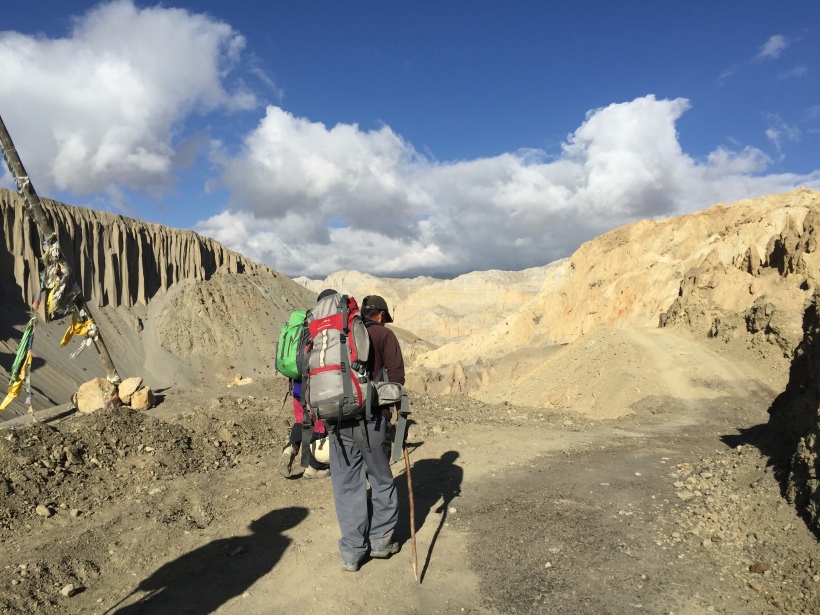 As we set out for Tsarang, first we followed the rough road high above the river. Opposite were the fluted cliffs honeycombed with caves and at the top, completely flat, dark grey plains. It was impossibly dry and barren. Even the stunted bushes grew sparse on the yellow hilly desert spread before and behind us. Then Neville, Jit, and Netra took a narrow track, leaving me at the mercy of Dabendra with whom I descended to the river bed and criss-crossed the river back towards Dhe.

Since the brown horse carried our packs, Dabendra wasn’t riding and couldn’t gee my horse up, but at some point we became separated and I found myself alone on a horse determined to get to Dhe. I had no idea whether Jit intended for us to head through Dhe, but I just had to let the horse go and it climbed up the river bank and into the village, ambling along the paths between houses and by the stone-walled fields and groves of trees, passing a wall of prayer wheels on the left as though it knew the protocol. The place was deserted but for an old woman and a little girl washing clothes at a tap. The old woman replied to my “Namaste” with little enthusiasm and the little girl stared up at me with a serious face.

I realised the horse knew exactly where it was going when it suddenly stopped at the doorway of a walled yard, turned and entered. As my head hit the top of the doorway I finally had cause to be thankful for the wretched helmet. I don’t know whether the horse had smelled it or made a note of it on our previous visit, but it must have felt very pleased with itself because the yard was filled with cut grass spread out and drying in the sun. But before it could set about eating the village’s precious store of winter feed, I dismounted and managed to turn the creature and pull it out of the yard. I was terrified someone was going to see me and think I was stealing their hay. Dabendra eventually turned up and we sat and waited in silence for the others. They soon arrived. As it happened we did need to stop in Dhe so we could be registered at the check-post. This was the first time I became aware this was necessary. All foreign trekkers had to be registered at checkpoints throughout Upper Mustang.

Jit decided they would once again take the narrow track along the cliff while we would travel along the river bed, so we doubled back while they went on and travelled along, criss-crossing the rivulets once again, with Dabendra whooping and calling to hear his voice echo off the cliffs. 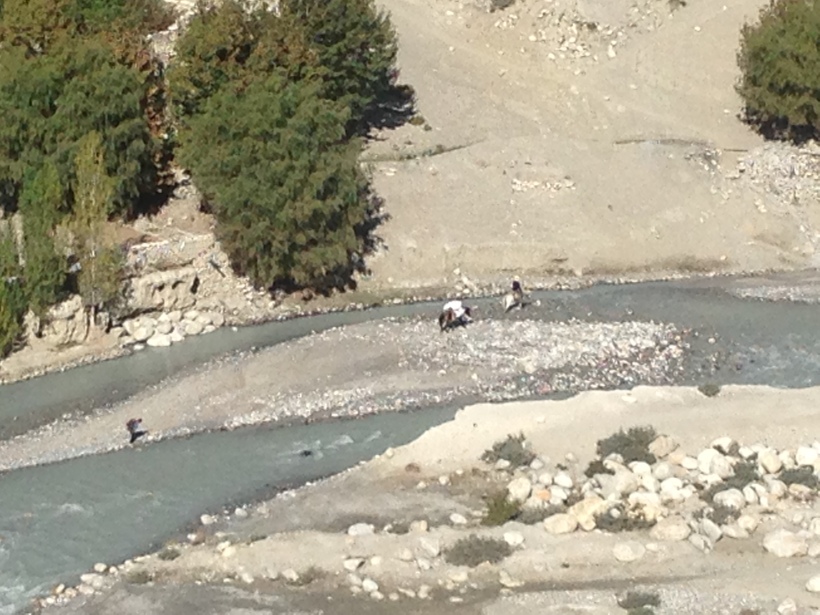 It was easy to see how the area had once been an ocean. In places the water ran clear blue over white sand. I wished we could have stopped and waded in the water, even though it was freezing. In that bright sunshine it would have felt like being by an ocean inlet and I wanted to see what was in the wide deep pools. It was peaceful travelling along that wide river bed with huge cliffs towering either side, but as the morning wore on our old friend the wind came up. But before it became too ferocious, we rejoined the others and rounded a point before heading up the Tsarang Khola. We crossed a wooden bridge and began ascending a track that climbed along the side of the cliff. As the track went on it became stonier—large slippery stones that clinked under the horses’ hooves—but then we turned and began to climb a very steep slope, straight up the cliff, covered with the same large stones. It was very hard going. The horses eyes bulged and they breathed heavily and frequently slipped and threatened to lose their footing. I think they were scared; I certainly felt more afraid for them than for myself. When we finally reached the top I dismounted and hobbled to a ledge to sit down and rub my aching knees.

Netra, who still hardly seemed out of breath after the steep climb, came over and sympathetically rubbed my knee as well.

When Jit and Neville arrived, we waited while everyone recovered before continuing on into Tsarang. We travelled along a pathway between stone walls enclosing groves of poplar trees. Some horses were penned in one walled yard and in a field also surrounded by a low stone wall a man was working with two strange looking beasts, like black and white cows but with large yak horns.

Dzos are a cross between cows and yaks. The females, actually called Dzomos, are fertile while the males, Dzos, are sterile. Yaks are rare in Upper Mustang now.

Jit led us through Tsarang and almost out the other side before stopping for the night at the Kailash Guest House.