Jit arrived promptly the next morning at 7.30 with a smart car and a driver. Bags loaded, Neville and I got into the back seat, which was covered with a piece of carpet. I put my seatbelt on while Nev dug around in vain for his.

“Everything Ok?” Asked Jit from the front seat.

The driver started the car and we went out the hotel gate and squeezed into the rough narrow streets of Kathmandu. Nev looked at me in resignation, but after bumping along for about ten minutes, without a word the driver pulled over and got out.

“We look for seatbelt,” said Jit.

We both got out and the driver dug around down the back of the seat, but no seatbelt could be found; Nev would just have to hope. 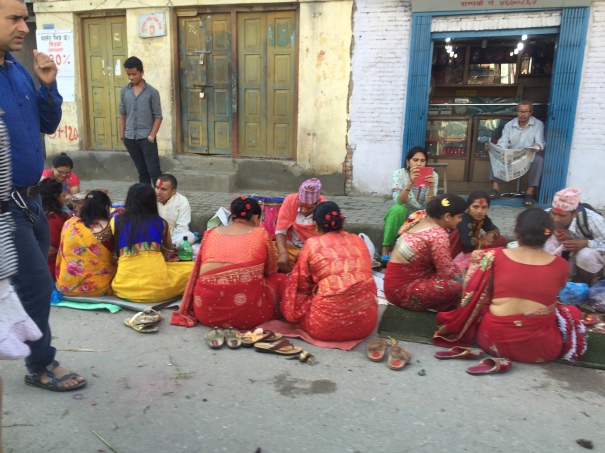 Women in red still lined the streets, wearing red and gold ornaments in their sleek black hair. With shoes off they sat on mats along the sides of the dusty road, oblivious to the blaring horns and traffic around them. Men with red tikka on their foreheads sat facing them and between them were plates of food.

As we wound up and out of the valley, we passed small groups of women, huddled together singing and dancing. The noise and dust of Kathmandu was gradually replaced by green hills, and soon we were passing verdant green rice paddies. High up among the terraced paddies one lone figure in red moved along a path.

It grew very warm and humid.

We passed a newly built factory by the river and I asked Jit what it was. After a short conversation with the driver he replied, “Is secret factory.”

It was early afternoon when we drove into Pokhara, turned up a narrow drive and arrived at our hotel. Here for one last night we’d have the luxury of a modern bathroom, aircon and TV, at least when the power was on. 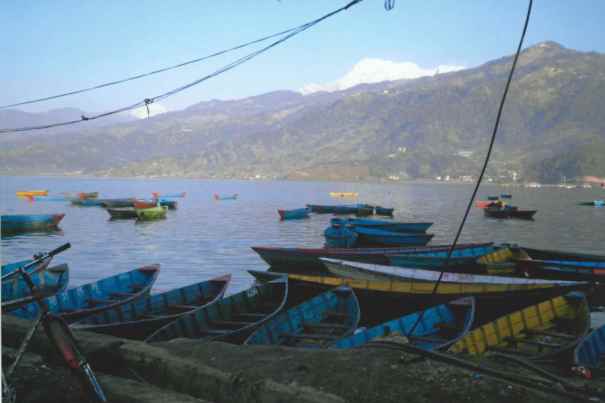 Pokhara feels like a beachside holiday town, at least by the lake. Colourful boats sit at the waters edge waiting for hire, while Tibetans from the local refugee community offer beads and posters.

There is a large police presence, especially around the entrance to what was the holiday residence of the royal family. The monarchy was abolished in 2008. A high fence obscures the property, but from the lake a modest two-story house can be seen, sitting empty and abandoned. Another building sits out over the edge of the lake, the screens enclosing its verandah filthy and torn. 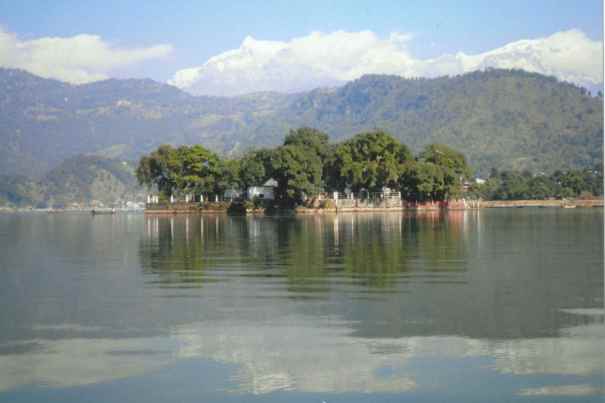 From the centre of the lake smoke rises and bells can be heard from the Tal Bahari Temple which sits on a small island. Pilgrims paddle out to the island to light butter lamps and make offerings to the goddess Bahari, watched over by the Annapurnas which loom above the valley and are reflected in its lake. 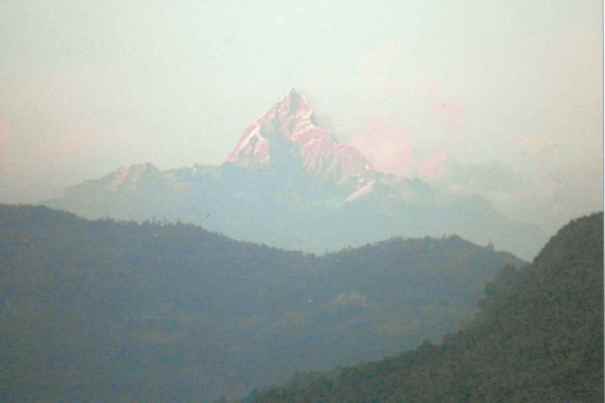 As the sun set, the sharp double peak of Machhupachare, the fishtail mountain, which dominates the valley, turned from glowing white to pink then purple. It is also called “Tiger Mountain” and if you look closely, you can see the sharp ear, snout, mouth, and front paws of a crouching tiger.

That evening we set out to enjoy a last good meal before we would have to endure twelve days of a bland trekking menu: rice, bread, eggs, and potato with much the same toppings and few fresh vegetables. Restaurants line the street that runs along the lake, and waiters in black pants and immaculate white shirts called to us to “just look” at their menus. We decided on a very new place, a hotel that was still being finished, and the staff were extremely eager to make a good impression, rushing to help us as soon as we made any movement and repeatedly asking if everything was ok. I asked them why there were so many police in Pokhara, and they stood trying desperately to find enough English words to explain, but in the end couldn’t; something to do with strikes was all I could gather.

We savoured our last taste of meat and toasted our upcoming journey with good wine before wandering back through the humid night air to our hotel. Many shops were still open, their owners trying to entice us in. Tourist numbers were way down since the earthquake and there was an air of quiet desperation.

Jit had asked us to meet him downstairs at 5.30 next morning. Flights between Pokhara and Jomsom, our next destination, are dependent on good weather, so we needed to be at the airport early to catch the first flight in case the weather closed in and we were forced to wait another day.

2 thoughts on “To Pokhara”